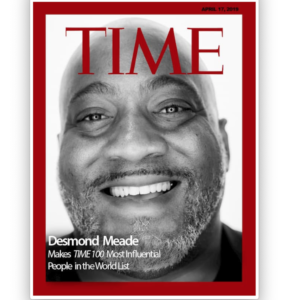 In 2018, Desmond Meade helped pull off the unthinkable. He united Florida voters by leading the campaign to pass Amendment 4, a grassroots citizen’s initiative that restored voting rights to over 1.4 million Floridians with past felony convictions. The initiative passed by nearly thirty percentage points – a rout in a state that is famous for being split down the middle.

The following year Desmond was named one of Time Magazine’s 100 most influential people in the world. In October of 2019, Desmond received the Clarence B. Jones Impact Award from the Communications Network. The award is presented to a leader who has used strategic communications and data to demonstrably elevate and advance issues, influence attitudes and beliefs, and inspire action in pursuit of social change.

In this special edition of Let’s Hear It, we present Desmond’s acceptance speech, which co-host Eric Brown called one of the “most exciting and meaningful twenty-seven minutes I have ever experienced.” Desmond tells the story of his own struggles with addiction, incarceration, and redemption, and leaves us all with an extraordinary lesson about how to unite people across their differences. You absolutely, positively don’t want to miss this episode.