We will emerge from this wounding – Joy Harjo, the first Indigenous Poet Laureate 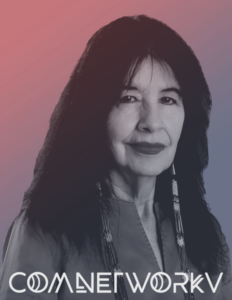 JoyIn this week’s show, we have a really special treat – Joy Harjo, the first indigenous Poet Laureate of the United States. Joy is in conversation with Rebecca Arno, the Chief Operating Officer of the Barton Insitute for Community Action at the University of Denver in a session recorded as part of ComnetV, the virtual gathering of the Communications Network, which was held earlier this year.

Joy Har­jo is the author of nine books of poet­ry, includ­ing her most recent, An Amer­i­can Sun­rise. Her mem­oir, Crazy Brave, was award­ed the PEN USA Lit­er­ary Award in Cre­ative Non Fic­tion and the Amer­i­can Book Award.

She is Exec­u­tive Edi­tor of the anthol­o­gy When the Light of the World was Sub­dued, Our Songs Came Through — A Nor­ton Anthol­o­gy of Native Nations Poet­ry, released in August 2020.

She is a member of the Muscogee Nation, and is only one of two writers who has served three terms as Poet Laureate.

We’ve been lucky enough to be able to broadcast some of the ComnetV conversations on Let’s Hear It, and as always, we’re grateful to the Communications Network for their partnership and support.